From June 3th till Friday 5th the annual International Smart City Event took place in the Amsterdam Arena. It was the fifth edition, and for me the third visit. In my view, the event has become more mature. Last two years centered mostly around examples and pilots, and with a...

From June 3th till Friday 5th the annual International Smart City Event took place in the Amsterdam Arena. It was the fifth edition, and for me the third visit.

In my view, the event has become more mature. Last two years centered mostly around examples and pilots, and with a focus on either sustainability or technology. This year, I was pleasantly surprised to see more cooperating municipalities and authorities on governmental level. Amstelveen and Huawei for instance. But also the collaboration between six European cities: Smart City and Energy Transformation. 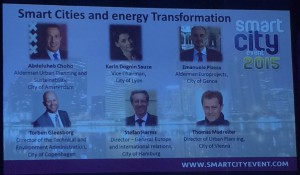 Also I saw more collaboration between government, businesses, educational institutions and the people. This awareness of the triple helix (actually a quadruple helix) seems to me to be indicating that we’ve reached the tipping point: it’s exponential and irreversible.

What more caught my attention? Well, there were several fascinating examples of an actual interaction between new technology, sustainable effects and a realization of the new economies – the sharing and circular economy. The emphasize on financial growth is still very much present, but I do see a slight change in thinking and beliefs.

The Amsterdam Arena is a very beautiful location for this event. It’s an example of a smart stadium – for instance they announced to work on maintenance by drones in the upcoming years. The room for the plenary start of the event was better than the opening in the stadium itself last year. Also, the real-time interaction with the audience was well organised by the app and the voting-software. 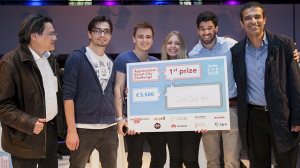 An excellent addition was the simultaneously organized hackaton in the Arena, initiated by Amsterdam Smart City, where people were working on urban solutions by use of open data.

Even though I was only able to attend the morning programme on the first day, I still enjoyed some excellent presentations, for instance Mayor Van der Laan (“I still haven’t met the first mayor of a not-smart city”), Molley Turner (“AirBnB helps spread the tourists throughout the city and therefore helps develop district-economy – they spend money locally”) and Neelie Kroes (“We have to work smart in architecture and construction industry – there is a world to win”). 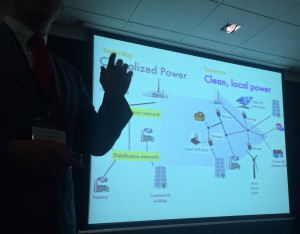 The second day was more focused on projects and examples in cities and urban areas. Unfortunately, it was mostly about the project itself, rather than on how it was smart and could be used in other ways. I also overheard people say that particularly these sessions called for more interaction, instead of these speakers telling their story. The end of day 2 offered a plenary session with fascinating stories of Thomas Rau (sustainability architect, and a specific vision on smart cities) and Peter White (focus on collaboration and process, necessary for smarter cities).

The third and final day was saved for three master classes. I was asked to provide one of the master classes and I gladly did so. It was a two times, two-hour master class, with a philosophical view on smart cities. I used my time not just for a presentation, but also for a dialogue, which was greatly valued. I was very honoured to participate in the programme, and many people responded that these master classes were a good addition to the event. 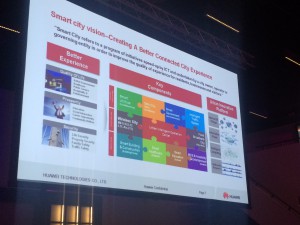 Lastly: I noticed that technology and sustainability are no longer separate subjects, but are both incorporated in smart cities views and projects. I think this is a vey good development! However, trying to build business cases around this is very hard if you keep thinking from the old economy views. Let’s try to invest in circular economy when it comes to commodities, and sharing economy when it comes to services.

It’s not that hard, and I firmly believe that this should be the focal point of the next edition of the Smart City Event: are we willing and able to incorporate the new economy in smart city development?

It is good to see that the Smart City Event helps the community to grow, as well as regards content as the community itself. I find this edition a worthy 5th year anniversary!