(How) will cities survive digital disruption?

Many aspects of the city are subject to digital disruption: platforms such as Uber will challenge traditional taxi services and logistics. Hotels are challenged by AirBnB, shops by online shopping platforms. How can the city cope? Will we - urban planners – struggle with digital disruption for the coming decades,...

Many aspects of the city are subject to digital disruption: platforms such as Uber will challenge traditional taxi services and logistics. Hotels are challenged by AirBnB, shops by online shopping platforms. How can the city cope? Will we – urban planners – struggle with digital disruption for the coming decades, like we did with the automobile in the 20th century? Do we need to redesign our planning approaches? Will there be a new Jane Jacobs in 30 years, recalling Smart Urban Design principles we are now developing? Or can we implement smart technologies smoothly, without creating much disruption?

The main question on future urban planning is: What will the long term effect of new digital developments be on the urban fabric? A current study on the impact of automated driving estimated a decline of 90% of cars and infrastructure needed when fully adopt automated driving. In that scenario, cars (or whatever you will name them) will drive itself 24/7 through the city without needing parking lots or traffic lights. Whether this will ever be reality can be discussed, but it can be clear a true smart cities don’t need today’s amount of infrastructure. And if the sharing-economy truly becomes mainstream, neither do cities need as much hotels, shops, schools, offices as they do now. In fact, at the current state the first ‘cracks’ of old urbanism are visible as there is a surplus of empty offices or closed shops. 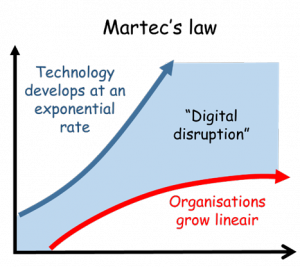 Are these ‘cracks’ temporal or structural? I would like to think the latter. The Internet of Things will soon enter our homes, cars and therefore cities. Self-driving connected cars could soon dominate our highway networks, facilitated by digital platforms such as Uber. Smart homes will provide electric power to smart grids which will distribute peer 2 peer power on the net. And as Tesla is providing us wall-batteries, the ‘internet of power’ and ‘internet of traffic’ will collide into one coherent system. Due to exponential advancements in ICT the rate of technological devices is exploding and will further explode in the coming decades. As a result of Moore’s Law, Martec’s Law predicts a growing gap between exponential technological development and the linear development in which our current economic and political system operates. As described in the book Exponential Organizations this will result in disruption, as already seen in the music industry and taxi business.

What if we could redesign the city from scratch, suited to these new digital (disruptive) technologies? Will we still need zoning? Shopping malls? Industrial sites? Separated infrastructure lanes? Railways? A thought experiment: try to imagine being a city planner in the early days of the 20th century and answering a similar question as we face now: How will the rise of the automobile affect the city and urban planning in the coming decades? Would you come up with the idea of highways, parking lots, ring roads, shopping malls next to onramps, drive in restaurants, and suburbs? Or would you have a more utopic vision on the city in the year 2000?

The smart city might look the same as the city we know now, like an electric autonomous car looks like a current car. But as the first cars looked like carriages without horses, in time the cars appearance will change, as their infrastructural surroundings will change too. Cars in the 20th century got faster, which led to the creation of highways. Suburbia became possible. Automated cars will have a similar ‘disruptive’ impact on urban fabric. But, as much as I would like to see cleaner, safer and a more efficient mobility system, it will not solve our livability problems. Like replacing horses with automobiles led to new problems, autonomous cars will give us new urban challenges.

So what will the city be in 100 years’ time? Or 50? Or 20? Will we have similar utopic images as seen a century ago? Does the Smart City truly look like Song Do? An automated collection of high rise building, similar to Le Corbusiers images of the ‘Ville Radieuse’, though interconnected? Or could there be a smoother manner of implementation of digital infrastructure, enhancing people’s lives by enabling them to make their own choices, instead of algorithms choosing for them? 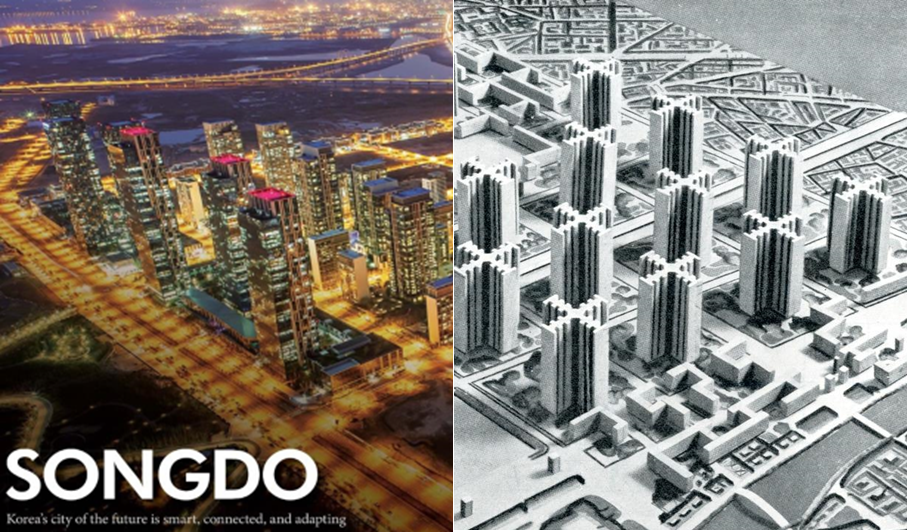 Mark Landenberger (IBM): “The use of technology as an enabler for innovation is essential”