5 years ago Amsterdam launched an event dedicated to Smart Cities. The theme was starting to blossom in big cities and none wanted to be left out. I have participated in four of the five Smart City Event editions, becoming a regular collaborator in the blog and platform that was...

5 years ago Amsterdam launched an event dedicated to Smart Cities. The theme was starting to blossom in big cities and none wanted to be left out. I have participated in four of the five Smart City Event editions, becoming a regular collaborator in the blog and platform that was created after, Smart Circle.

What happened from 5 years ago up until now? Have Amsterdam and the majority of other big cities changed? For better? For worse? Have they become smarter? Or dumbed down?

Remember that, in 2010, we were experiencing the social networks’ boom, and Facebook, for instance, reached its virtual social activity peak in 2012/2013. Remember that, comparing my other visits prior to 2007and 2010 (before the IPhone was launched), Amsterdam was already living glory days with Startups (that have become huge in the meanwhile) and with sustainable culture, an open and tolerant society, a modus vivendi that allured thousands of young people to get establish there and millions of tourists to experience it for a few days (it is not worth it to talk about prostitution and drugs, a worry that Amsterdam has overcome in a Smart way, even though there still are quite a few adjacent problems). 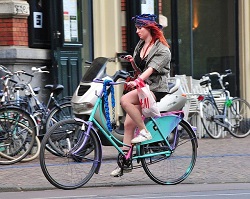 What has changed in 2010? Technology and social networks have digitalized us. And even though Dutch people continue to ride their bikes in winter, out in the cold and rain, they now do it “connected” and continuously staring at a small screen. Of course the problem was not the “accidents” caused by this strange behaviour that, I must say, I’ve seen some boys and girls execute in absolutely extraordinary ways. What a skill! Steering with one hand, cell phone in the other… all were connected. This has made them, though, physically disconnected citizens in the city.

Well, in 2015, the scene remains more or less the same. Despite the growing trend for citizens to “disconnect”. Despite the Facebook eruption having been stagnated which was, on the other hand, replaced by the eruption of other networks, such as Snapchat for the younger, for example.

The 2015 Amsterdam has more young people enjoying the outdoors, parks, more people practicing sports, reading books, the number of bikes keeps growing and also the number of smartphones… yet I have the feeling that it is not like in 2010. But looks are deceiving. Besides that, I have asked two young people what they thought about all this digital paraphernalia and the peak of people disconnected from their own family, let alone from other citizens. One of the guy’s I have spoken is still using Facebook “but not like before”, he said. He now uses more the instant messaging, “to set up dates and plan activities with his friends”.

The next day I spoke to another friend, a little older, around 38. To the same question (if was more or less dependent on technology) he answered that he was less. “I have never been so tired of technology as today”, he explained. “It is incredible to watch in the subway, restaurants, bars, young and old people, whole families, without exchanging a single word, simply staring at their phones as if they were hypnotized”, he said. “It was like a big hammer to the head! I saw what was happening to me and decided to change my life”, he concluded. He now spends more time with his friends and family, practices sports, does voluntary work, cooperates with civilian movements in his neighbourhood. Come on. When I hear these two versions I imagine how it will be like in a few years. As the way that is now the generation that grew up with television. Before the Internet and after the Internet. Before the mobile boom and after it. I am appalled and apprehensive. In fact, throughout all the cities that I have gone by, this digital excess and lack of real sociability phenomenon is happening. And I can also see that there is another side to that. The digital disconnected side, involved with life, the species, nature, art, culture and education.

Wow, as I’m writing this, a young woman has a small accident while going around in her bike and handling her phone. What the hell?! After all Amsterdam has not changed that much.

But then, someone immediately helps the stumbling girl (still holding her phone). So, at the end of the day, there still are attentive, observer and helpful citizens. True gentleman I must say.

Then I think how could these two individuals’ lives turn out to be. She, falling down her bike while texting or simply navigating Facebook. He, listening to a song on his smartphone while jogging. She, hyper-connected. He, digitally hum…. basic. But attractive, though. They become friends. Start dating. Start a family. They turn out to be happy (I imagine).

Smart citizens, modern and involved in their environment and adapted to their surroundings. A random situation (and ostentatious, happily with no greater damages) has united them. This is just a hypothetical story of course. But it could be real, or even have already happened. I don’t know.

The big problem with technology and digital evolution is not causing bike falls. It is much serious than that. And, the way I see it, this is the great danger of intelligent cities excessively based on technology.

Let’s talk about social engineering. A myth? Maybe. But it is already possible to state for sure that the amount of existing data, closed or open, allows simplifying apparently complicated things.

Let’s take for example the hypothetical case of this young girl that fell from the bike and was attended by a true gentleman, falling in love with him, marrying and creating family.

What if it was not a random situation?

She: hyper-connected, gives a bunch of information in various platforms, from our old friend Facebook, and other social networks, to the apps she uses to make friends, set up dates, etc. by now, she has shared a ton of likes and preferences. About the ideal man she would like to meet, about the kind of music she listens to, about the movies she loves, the series she won’t miss, the food that makes her mouth water, the books she knows by heart, the fears that take her sleep away… well, a countless amount of information that she and all of the hyper-connected citizens like her are giving away to major corporations such as Facebook, Google, Amazon and others.

He: probably was once hyper-connected. Slowed down, and now spends less time online. However, the information he once shared contained a lot of data about his personality and personal tastes that lingers in some cloud of the thousands that now exist.  Even he currently is less connected, he still uses some apps, such as Spotify for music, itunes, shazam and others like Google maps, sports apps and, of course, Facebook once in a while.

Now the surreal case: an Artificial Intelligence decides, when analysing all of the available Big Data, that these two individuals have a percentage chance of running into each other, meeting, falling in love and building a family.

Unreal case: this is still not happening. Or is it… 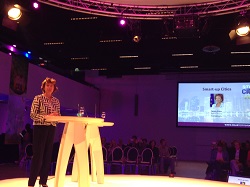 Talking about the future of entrepreneurism, as said by Neelie Kroes, without underestimating citizen’s intelligence. The former European Commissioner and EU Vice-president, now busy stimulating the startup movement in Amsterdam, has also said that a lot is failing in the way ideas, projects, decisions and other information that should be the top priorities of any city, administration or company, are communicated.

Talking about shared economy, of its advantages and disadvantages, but mostly about the change in paradigm in the way citizens interact with business, how they take advantage of their assets and are forced to find ways to counter the lack of employment, the increase in rents, taxes, and other dramas that distress family economies. Bottom line, as so well explained by Molly Turner who gave the example of the social function that Airbnb current holds in cities and economy.

Talking about digital destiny as an inevitability, another stop in the human specie’s evolution, as Shaun Dubravac insisted in stressing, despite a part of the world being completely abstracted from technology, disconnected and searching only for food, livelihood, water (!) for their children and a worthy death to their elderly. A digital destiny that places the “smart ones” in a level of development completely different, accentuating racial disparities, geostrategic and social.

Going back to social and economic engineering of the neoliberal capitalism or even to of the Chinese liberal Marxist socialism, for example. Going back to the beginnings. To human principles. To values.

Let us go back in time. To the time when, intelligent or not, we had destiny depending on our own choices. We had probabilities in sync with the exclusive and universal principles of mathematics… Oh Wait!…After all we are living those times…Yes, the times of smart cities, intelligent machines and smart citizens…

After all it is the destiny! Embrace it! Or not! You decide your own destiny! Or not…