Looking at the large new and successful players in the digital economy, such as Uber and Airbnb, it is not so much their new technology that changes the game, but moreover the ability to connect supply and demand using these technologies: digital platforms. Starting as a trade market for goods...

Looking at the large new and successful players in the digital economy, such as Uber and Airbnb, it is not so much their new technology that changes the game, but moreover the ability to connect supply and demand using these technologies: digital platforms. Starting as a trade market for goods and media, now more and more aspects of the city are becoming connected through these platforms on an exponentially growing rate, such as housing, shopping, energy and mobility. What does that mean for the city?

Before only disrupting domains such as the music industry and video stores, digital platforms now seriously start to interfere with the physical city: Airbnb ‘owns’ more rooms than Hilton. Uber ‘transports’ more persons than regular taxi’s do in New York City. Instead of focusing on mass transport (where public transport is being increasingly at stake) Uber starts on the other end of the spectrum: mobility niches such as individual trips. AirBnB follows the same pattern: hotel rooms no longer need to be clustered within a single building, but can be dispersed around the city. This phenomenon is being described as The Long Tail by Chris Anderson: by connecting supply and demand on a small scale, using internet as a platform, costs to connect supply and demand decreases exponentially, therefore: ‘web 3.0 creates the ability of an infinitely long tail of buyers and sellers to match via digital platforms.’

Those who gets to the top first, wins

Within the world of digital platforms, it is clear new rules will be applicable, whether it applies to media, shopping, mobility, energy, housing or recreation. Maurice Kreijveld states in his book ‘The power of platforms’ that ‘digital platforms will be the new pillars on which a multitude of products and services will be produced. Platform providers will control the infrastructure of the future. They may control the rules of the game, the technology used and the access to a platform. Next to this, the ‘first mover advantage’ applies here: those who are first and gain the largest group of users, win.’ This in other words means: ‘those who gets to the top first, wins.’

So those organizations which are based on information and digital services have the ability to reach further in the market and on a more individual level, compared to organizations based on hardware or devices. But what explains the exponential speed of this new game? There seems to be a distinction between speed of ‘analogue’ distribution and ‘digital’ distribution. The traditional adoption curve (innovators, early adopters, early majority, etc.) is based on the distribution of physical goods: first a few people accept new technologies, than gradually others follow. This does not apply within the world of digital services, as it’s easier and cheaper to add one more product or customer. Another distribution model applies here; starting with a small group of trial users who will freely and actively be involved in the development of a certain product or service. Once tested, all other members will receive these products, often known as ‘updates’. Your smartphone for example can be updated periodically downloading new software anytime and anywhere. Before that happens, a minor group of trial users or developers have been testing these updates. And even if you are one of those people who never wants to update, you will evently be forced to. 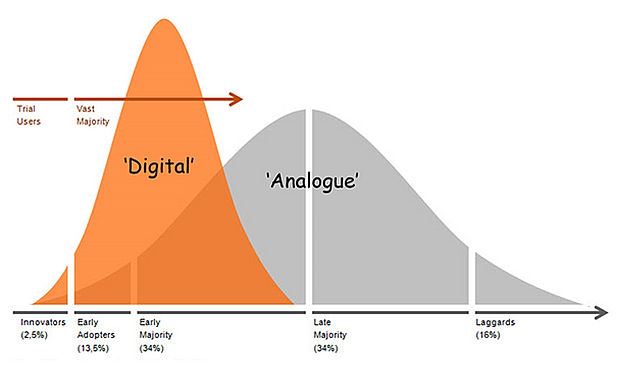 To have or not to have

The rate of acceleration further enhances the distinction between the haves and have not’s. Not so much you will be an early or late adopter, it’s more likely you will be a ‘have or have not’. This implies a growing distinction between traditional business models based on physical goods and new digital platform based business models based on digital services: not to own a product sooner or later is of importance, but having access to a product or service. One could say, digital distribution is ‘binary’: either you have it (1) or you don’t (0).

How does this apply to urbanism? As cars, homes, shops and other everyday devices will further collide with ‘algorithms’ (online shopping, connected vehicles, smart energy systems, etc.), the rate of updating these devices will accelerate and eventually disrupt existing practices such as physical shops or car manufacturers. One example could be Tesla, a company that is not so much creating automobiles with smart technology, but smart mobile devices which happen to look as automobiles. By starting from scratch and using sensors and software, technical improvements are much faster available to the user. This mechanism also applies to new platforms such as online shopping, shared mobility platforms or other sharing-platforms: the cost and expense of adding either one more user or adding one more product / service is almost zero. Just push update.