I left a piece of my heart in YinChuan 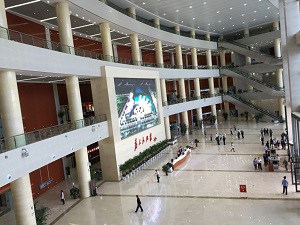 Unfortunately there is background noise. It gets too much. Many questions start to be asked about what is a Smart City, or whether this technology is that. It is no longer interesting. We can either assert once and for all that the world will never be able to live without cities and that they must learn to live with the rest of the world, or we will otherwise fall into a meaningless pit of extravagance, of an outstandingly exhibitionist dogma surrounding tools that do little or nothing to resolve problems and that, on the contrary, blunt us and make the intelligent impotent, inefficient and clumsy, like a daughter born out of the inflated morbidity of the mediocre and useless.

All these feelings could have manifested themselves at the precise moment when I notice the rain, the grey, the mist, at Beijing’s airport. The wait for a connecting flight to another Chinese city made me foresee the worst; the weather really brings out the worst in us. I, at least, become nostalgic, still, sullen and brusque with others and myself.

Everything changes, thankfully for the better, when I touch down in YinChuan, my final destination.

The event TMForum In Focus Smart City 2015, organized by the important Industrial and Professional Association, the TM Forum, had already taken on the air of a pleasant surprise. It was only confirmed to me at the exact moment when I discovered the fluidity of it all; but everything worked, nevertheless. And so, I took a deep breath, forgot about the bad weather in Beijing and waited for the next day, and… Sunshine, blue sky, heat! Yinchuan welcomed us with open arms, with light, caressing us with its gentle warm breeze. I was ready to discover. I was in China and so far only knew that Yinchuan was intelligent from what I had seen on the Internet and in my prior research. Yinchuan promised much and looks as if it wanted to fulfil.

I shan’t go into too much detail about the actions promoted at this event. From the visit to the Citizen’s Hall or to the intelligent neighbourhood, to the conference dedicated to the Smart Cities theme. Everything was gearing up for a success, a mark of a compelling kind, for the quality of the speakers and for the relevance of the themes, even more so in a Chinese city. 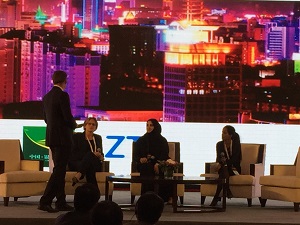 But what really made the difference was the ambience. What was surprising was the quality rather than the quantity; it was much more exclusive than normal. The organization took people from all sectors (administrators, politicians, associations, NGOs, journalists, communications specialists, researchers, academics, bloggers, telecommunications companies, etc.) to Yinchuan. This diversity and the certainty that it was the right audience, however demanding, put the event on the proper footing and stressed the importance of Chinese cities on the Smart Cities map.

The whole interaction was frank, direct, razor-sharp and extremely friendly. I made many friends, as well as meeting old ones again. At any event, it is important that more friendships are made rather than business. Frankness and interaction are the best tools for unlocking processes, clearly key for cities, organizations and governments to function efficiently. Once again communication is the key factor in stability and progress; it was thus.

But will it make much difference that an event, taking place in a distant city lost in the immensity of a country like China, was a beacon for intelligent solutions? Would this event be good enough to present us with Yinchuan in a transparent manner? Would the city have the arguments to convince the sceptics to accept their defeat? Would it have a broad and diverse group, hungry for knowledge, experience, novelties and the ability to see their wishes fulfilled and expectations exceeded? Yes.

The TM Forum event was like a monkey wrench that put in huge nuts and bolts and fixed them in place perfectly. It was the event they organized that showed Yinchuan to the world. And the Chinese city agreed to open up and show itself off. Firstly, with the China-Arab States Expo that was held there, and later with the initiatives announced to further advance the Smart City. One of these initiatives is the creation of the Smart Cities World Innovtion Centre in partnership with ZTE. The objective of this centre is to bring together international efforts to establish Smart Cities case studies, standards and good practices with the aim of serving cities and towns throughout the world.

The city as a temple 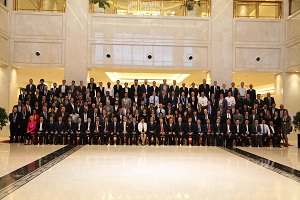 Everything seemed fair and perfect; even the weather.

But there was still something missing. As is my wont, I lose myself in every city I visit. In Yinchuan, this was even easier than normal, as the online maps didn’t work, the quality of the Internet didn’t help and to make matters worse, there was the language barrier. Travelling around the city by taxi is cheap; there is also a Chinese version of Uber. The hardest thing is giving the indications and directions. Either someone at the hotel writes them down for us to show the driver, or we are set adrift, totally lost in translation.

I often got lost in Yinchuan but, curiously, I didn’t feel lost at all. What I felt was a spiritual peace and calm that I hadn’t even experienced in the city’s temples. A sensation that could be compared to temples in forests, fields and mountains. Not in a city right? But I found a Buddhist retreat where insects, birds and reptiles seemed to intone affectionate and friendly melodies. I don’t how the Buddhist reincarnation process works, but there I felt a lot of humanity, much peace, many spirits and good vibrations. Certainly the excesses of the previous sleepless night also contributed to my spiritual slumber, but it was peace that I felt. It was good.

Returning to the city I got lost again. I went into one of Yinchuan’s commercial centres, which is owned by a very influential person in China. The consumer momentum is here to stay in China. The shops are nicely decorated, the service is friendly and, unlike what one would expect, nothing sounds artificial. Even the neon and LED lights that cover cars, machines and entire buildings, give off a graceful air. The city needs this energy.

The cinemas were rather busy. It was the opening of the Minions film. I went in to see it and watched the Chinese version of the film. I didn’t learn Cantonese, but I sensed the atmosphere and even laughed along with the others. The visual jokes are always the best.

And we cannot make the mistake of leaving the city without visiting the Modern Art Museum. One of Yinchuan’s cultural attractions with a guarantee of quality.

I was still lost in Yinchuan. Lost among the streets and alleyways, among markets with pets, vegetables, plants, fruits, clothes and delicacies; crossing any street was an (dangerous) adventure. I found myself wondering how could the neighbourhood that we had visited the day before, replete with technology, calm and silence, be part of the same city. But the truth is that, apart from some taxi and public transport (buses) drivers, most of the pedestrians and motorists seem civilized. There are certainly far worse and more dangerous places. For now, I enjoyed being lost. I still wasn’t even slightly worried. Not least because I needed to try out the food and ended up sitting down in the traditional barbecue area to eat mushrooms, chicken and fish balls between different places.

Where do we see the Smart City in Yinchuan? For me, for it’s the passion. It is a fascinating city, with problems, for sure, but the attitude of those in charge shows a path towards increasing the citizens’. And the citizens themselves? Do they sense this opportunity? From what I saw, yes.

Companies lead in Technology and Research

I got in touch with one of the many technology companies in Yinchuan. One of the sectors that those in charge of the city want to develop and progress with.

Ningxia Sine Technology Group Co., Ltd is a technology company that researches and develops products and services for the Internet of Things (IOT), big data, security, privacy and mobiles. It is fully immersed in building Smart Cities, focusing much of its activity on the Sinelife project, which contributes to improving quality of life through science and technology.

And it also shows itself to be an intelligent company! Why? Because it creatively develops solutions that bring citizens closer to products and services using technology. One of this company’s (with more than 200 employees’) success stories is the development of an e-commerce platform based on an app for smartphones. Products and services can be acquired with a few simple clicks. The deliveries are fast and the benefits evident. For citizens with mobility issues, or for those too busy to waste time and money looking for the right supplier.

The solution was scaled up with the development of an identity, promotion, street campaigns, social responsibility visits to schools and institutions, countless best practices that prove correct the theory that creative environments promote the solidification of Smart Cities.

Yinchuan is like this. Huge, dispersed, honest, quiet, green (very green), humble and peaceful. It’s also fascinating in the way that it welcomes and worms its way into the hearts of those who leave it. A little of mine stayed there; I hope to return soon to get it back, and to see how the intelligence, the emotions and the persistence have combined to form a solid and respectable block. I, at least, am convinced. Yinchuan, Smart City. Without a doubt.