Smart is more than durable

29 and 30 May the Smart City Event 2013 took place. Two inspiring days at the Amsterdam Rai. This event has now been organised for the third year. Because of the big attendance, it is noticeable that the concept of Smart Cities addresses many people and keep them occupied. I... 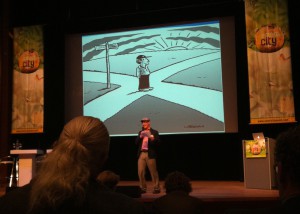 29 and 30 May the Smart City Event 2013 took place. Two inspiring days at the Amsterdam Rai. This event has now been organised for the third year. Because of the big attendance, it is noticeable that the concept of Smart Cities addresses many people and keep them occupied. I sort out a few things that have struck me during those days. 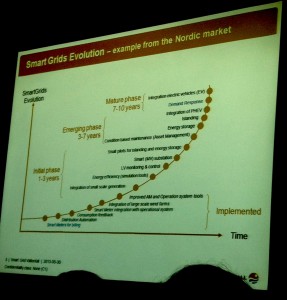 The graphics of Vattenfall, that Johan Söderbom (program manager smart grids) showed us. This European energy company has been busy to set up a smart energy network for years. They do this actively at the Swedish island Gotland. The graphics proves that it is a project of long breath and long for funding. The beautiful part of this is that it has an exponential line, just like many developments. It takes a long time before all the chains of the system have been adjusted. Vattenfall reaches the point now, that the acceleration is going to take place and it is their time to harvest. 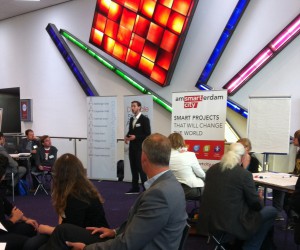 The workshop of the DSA (digitale steden agenda) and Amsterdam SmartCity. Where durability coupled with new technology dominated the lectures and workshops on both days, the end user was central in this workshop. Why do people participate in all these technological developments? From the themes of the DSA, the participants of the workshops spoke about how new technology fits into the daily lives of people in small groups. A question that is not really easy to answer. 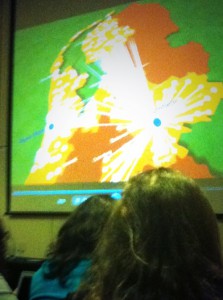 Liander (a daughter of Vattenfall, by the way) is responsible for the cables and pipes in a large part of the Dutch electricity network. They actively unroll a smart grid. Among other things in Amsterdam Osdorp. Eventually it will create the possibility that individual housekeepings can redeliver their self-generated energy to the grid. It occurred as striking to me that they have chosen Haarlem and Arnhem to be the two poles which make this possible. Haarlem and Arnhem lead the way in this case, from which a great part of the Netherlands benefits and will benefit.

Striking matters: what I have missed….

It struck me that smart was merely explained as durable with a layer of technology on these days… that is rather one-sided. SmartCity is more than durable technology, or it should be more than that. Next to this the emphasis was especially put on the inclusion of the big political and corporative interests. According to me the emphasis should basically be on the added value of the daily life of people.

Next to this I saw a lot originated from existing trends and technologies. I missed the real visionary stories and the drive coming from those visions. For example a story about 3D-printing and the revolutionary impact that this printing will have on the city. This develops really fast (see 3D printing: the new industrial revolution?).

Or the thoughts of the biomimetics (to learn from nature: for example watch the serial “We want that too” from the VPRO) or the major impact of mobile internet (4G) which is going to cause a completely different behaviour in cities.

Also the connection with the major social economical shifts was missing, in my opinion. Like trends of part economy; “no ownership but use only”. And the off-the-grid trend within the new economy (where people organise their own energy and care) and smart city as super charger of this new economy. They got mentioned and were the source behind most stories and workshops, according to my taste they were not discussed explicitly enough. I would like to see more vision in the thinking about and the realisation of smart cities.

Notable were the strong “supply-oriented” stories. I advocate again to centralise the end user (have a look at my second blog for this event with thinking from design thinking/thoughts: not a central place for the suppliers and the business model, but the end user). Fortunately this was the case in the workshops of DSA and Amsterdam SmartCity. It was too complicated for all participants to get a grip on this.

At this point a lot of work has to be done!