Do we really want to be smart?

Smart (technology) is a fast arising trend. Many people observe this and join this trend. Or are they? A lot is happening now: technological developments are fast and many. It makes people hesitant: what’s really in it for me? Do I want all this? Even investing is difficult: How...

Smart (technology) is a fast arising trend. Many people observe this and join this trend. Or are they?

A lot is happening now: technological developments are fast and many. It makes people hesitant: what’s really in it for me? Do I want all this? Even investing is difficult: How do I know this is not a hype? Obsolete after one year? Appropriate questions, but hard to answer. We are in a developmental stage, where technology is evolving faster than we – as humans – can handle and integrate in our lives. So much is happening already on societal and environmental level, even apart from technology…

Yet it is happening all around us and we can’t deny it. New technology is the great driving force behind all these current changes. And everyone is in it, in different ways, in a different pace. Wether they are aware of it or not. It also depends on what sort of technology and if you think it’s important or not. 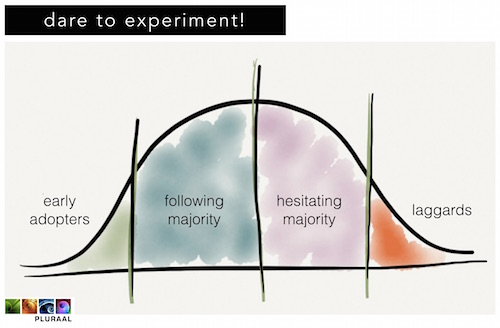 The result is that precisely the people who try new things, also struggle with these questions. What’s really in it for me? Does it have added value in the long term? This group of people who experiment (the early adopters), is relatively small. Most people prefer to stay back a while and see what others do. This is actually a normal partition (according to Everett Rogers and his theory ‘Diffusion of Innovations’ published in 1962): innovators and early adopters, early majority, late majority and laggards. This last group isn’t in in any way.

To make it more profound, I often use my axes cross of willingness and ability. By placing these groups between the lines of the cross, it becomes clear how to deal with them. And when you place yourself inside this cross, you will notice that you’re not in the same position when it comes to different services or products.

In this way you are able to precise the majority. Not by early or late, but: following majority (want to follow) or hesitating majority (not willingly to follow). So for me, I am a early adopter on social media and a follower for LED-lightning in my home. But when it comes to electric cars being the future, I am hesitating.

The early adopters are trying new things anyway, you won’t need to convince them. This is however relatively a small group. Yet I see that most of the marketing budget and energy is targeted on this group. 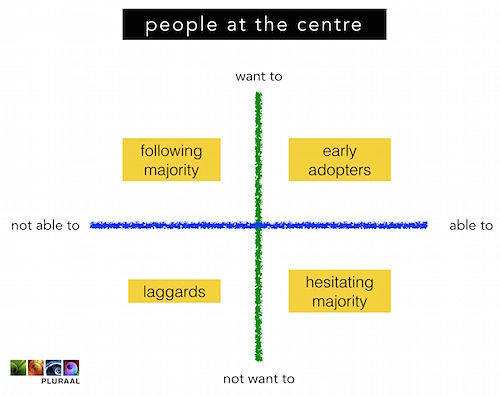 The two biggest groups are the following majority and the hesitating majority. Wouldn’t it be much smarter to point your strategy on them? Someone who wants to, but isn’t able to, can be trained. Or offered this service/ product in a different way. Especially when it comes to software, you can make your goods to measure. And the hesitating people have to be made clear what it is that this product or service has for surplus value. That’s a whole different approach!

I think it all starts with awareness. Hence this question: where are you when it comes to new technologies? Are you a early adopter (or even an innovator), a follower, a hesitater or a laggard? For what technology, product or service? I am curious to know, so leave your answer below!