The hybrid city is currently a fact. Before 1990 only built cities and their citizens existed. Since the rise of the Internet, the virtual world as new phenomenon has been added. At the beginning, that virtual world used to be entered from homes and offices. Nowadays the mobile Internet is... 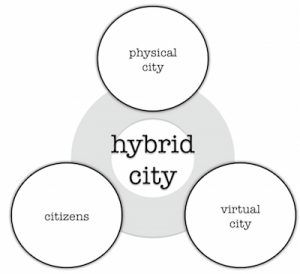 The hybrid city is currently a fact. Before 1990 only built cities and their citizens existed. Since the rise of the Internet, the virtual world as new phenomenon has been added. At the beginning, that virtual world used to be entered from homes and offices. Nowadays the mobile Internet is fully integrated in the public space. This has influenced the behavior of people in the public space incredibly. This blog is about the influence of the hybrid city on shopping areas.

Mobile Internet has rapidly increased in Netherlands. 51% of the Dutch population had access via their mobile phones in 2011. It used to be 35% in 2010, which means a huge rise in one year. Now in 2013, it is estimated that 80% of all people in The Netherlands have mobile access to the Internet.

The upcoming 4G-network will further strengthen this trend. More and more people live in constant connection with others and with the whole (virtual) world, at home, at work and on the street. And that affects their behavior. Online shopping is no longer something that has to be done at home.

This has consequences for shopping areas. Almost all retailers experience difficult times. On the one hand, high real estate expenses and high salaries for employees, on the other hand the customers buy less and less in their physical stores.

Retail figures show the increase in online sales and the decline sales physical stores (see the chart). An amount of nine billion euros was purchased via sales through the internet or other forms of home shopping in the Netherlands in 2012 (figures Blauw Research, 2012). In 2005 this was still 2.8 billion euros, which means tripled figures in six years.

Where the number of physical shops in the food sector remains fairly similar, the biggest collapse occurs in the non-food sector. A striking example is the increase in online sales of clothing: from 555 million euros in 2010, to a 630 million euro turnover in 2011 (figures ING economic Bureau, 2012). An increase of 15% in these times of financial crisis! 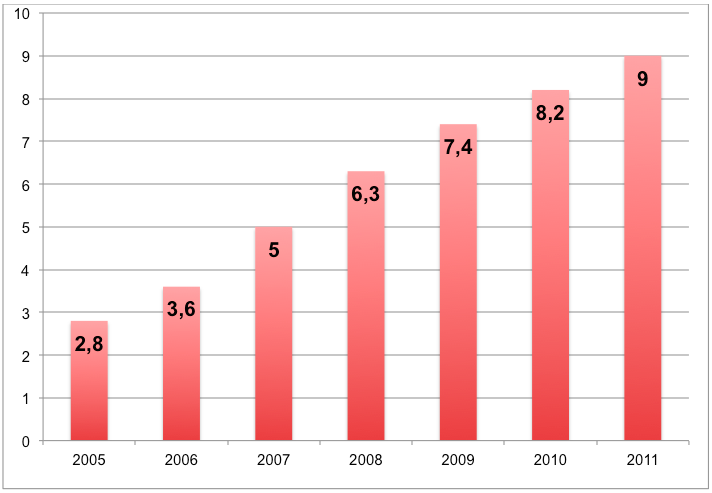 A response to this trend is “Het Nieuwe Winkelen” (Shopping New Style). The idea behind this is connecting the best of both worlds: the physical stores and Internet shopping. Initiatives from this new trend don’t see the Internet as a threat but as an opportunity.

The core of this idea is the preservation of the benefits of physical shopping and overcoming the disadvantages. At the same time including the advantages of online shopping in physical stores.

In addition to that, companies like Nike, Philips, Apple, Siemens and Cisco develop large touch screens for shops, where you get a virtual view of how clothes look on you and you can even change the colours simultaneously. Next to this are easy-to-use displays where you can obtain information about products, without the help of a salesperson. You can even pay with your smartphone in several shops like the Apple stores or some of the Albert Heijn supermarkets. Next to this, shopping arias work also with a concept where you can easily arrange the affordable delivery of purchases; by a co-operation between shopping centers and local carriers.

In short: the hybrid city is no future image, but reality now, which provides great opportunities. However, the question is to what extent entrepreneurs, but also consumers, want to and can go along. Various players in the retail industry work on new store concepts by technology. They embrace the possibilities of the hybrid city and see Shopping New Style as a total concept.

If there is also attention for the design of public space, such as the offer of free public Wi-Fi and smart public space, it will create new opportunities for all shopping areas. It’s a time to experiment and see what new concepts are retrieved by retailers and whether this really matches the needs of the consumer. The shop areas in which property owners and entrepreneurs have the courage to experiment and invest in it, take an edge over the rest.